If You Want Jokes, You Got It

Well, anyways, so I got a lotta joke-telling to do the next few weeks, and if I can be honest, it'll go a lot better for all of us (but mostly me) if you guys brought your ears to me rather than the other way around. If you're not in San Diego, then you should be. Not just for me, but it's, y'know. It's a happening town.

Firstly, I am participating in this year's San Diego's Funniest Person Contest, brought to you by Sheik Condoms and the good people at Mountain Dew. The show is this coming Monday, February 24th, 2014, at 7pm, at the Madhouse Comedy Club, located conveniently in the remnants of Horton Plaza in Downtown. There is a minimal cover of five measly dollars. I will be pitted against 9 of my comedy peers in a fierce battle to the dearth, and four of us will advance to Round 2: Electric Boogaloo. The audience will cast a vote, so if you got nothing better going on, c'mon down and cast your vote for me and/or whomever. Be on time, though, as you can't vote if you get there after my set because democracy does not work. 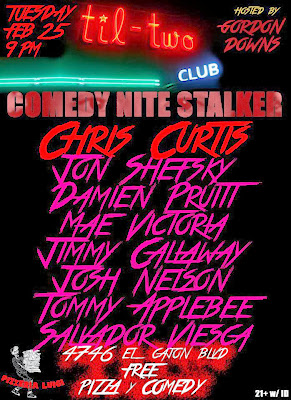 The very next evening, Tuesday, February 25th, I will be once again on the bill for Gordon Downs' Comedy Nite Stalker at the Til Two Club, in the scenic bad part of town. Not only will we not be competing for anything more than your love, there will also be free pizza, courtesy of the good folks at Pizzeria Luigi (although you might wanna get there early, as it goes quick. Personally, I will be there at 5:30 am). This is a way fun show, and between you and me, I fuckin' crushed it last time, so be sure to show up for what is sure to be a second-rate performance. But also expect first-rate performances from such hilarious men as Ryan Hicks, Tommy Applebee, and your headliner, Chris Curtis.

For my darlings in the North County, I will be performing in pastoral Poway, California, at the Company Pub & Kitchen. Good ol' Jonathan Bird will be your host, and the bill will also include my dear friend and roommate April Ventura and my dear friend and soulmate Jeffrey Berner
. It will put the 'pow' in Poway! (I hate myself.) 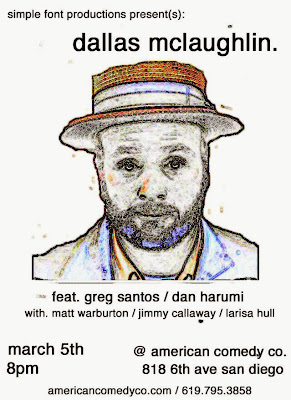 Back on downtown, I will be part of Dallas McLaughlin's show at the American Comedy Company on Wednesday, March 5th. If you've never been, the ACC is probably the best joint in town to go if you want jokes put in your heads. Getting on the guest list is just a click away, as well; merely go to the Facebook event page and leave a comment that you want in with as many plus-ones as you can handle. On top of that, there will be $5 beers and appetizers. It's like you're making money by going to this show. Dallas is one of the funniest dudes in town, and featuring will be L.A.'s Greg Santos, who I saw a few times up at RIOT - LA last month, and he murdered each time. Also on the bill are the very funny Larisa Hull, Matt Warburton, and the high-energy comedy stylings of Dan Harumi. DO NOT MISS THIS SHOW.

Coming up later in March, I'll also be appearing at @spacebar in La Mesa on Friday, March 14th, and then on Friday, March 21st, at Subterranean Movies & Music in Hillcrest. More deets on those as they get closer.