Jeff Lemire: #1 in Our Hearts 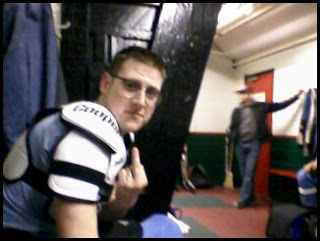 Hands down, my best experience at the Con last year was meeting Jeff Lemire. Moreso than completing my Ultimate Spider-Man collection; moreso than getting a free copy of the first two seasons of It's Always Sunny in Philadelphia; moreso even than the time I ate my weight in Godfather's Pizza.

I was at the Bud Plant booth (or was it Comic Relief?), and I saw the third volume in Lemire's Essex County trilogy. I nearly lost my mind. Although it had only been providence that I'd come to pick up the first volume, I know for sure I would have ordered the third volume, but as near as I could recall, it hadn't been solicited yet. But then again, I get so much stuff every month, and even purposefully try to forget what I order (so as to be surprised when it gets in my hands or less disappointed when it don't), so who even knows now? As you can imagine, I was in a panic.

Fortunately, cooler heads prevailed, and John suggested we go over to the Top Shelf booth and get to the bottom of this. As we approached said booth, I coould see the volume in question there on the table. I marched up and asked the first guy I saw if this volume had in fact been solicted by Diamond yet. He informed me that no, it hadn't, but they'd brought some copies down just for the Con. So I said set 'em up, country music, my buddy here and I will relieve you of a couple. The guy said, yeah, all right, and when he got up to transact the sale, I saw his badge: "Jeff Lemire, professional." "Oh, shit, it's you," I said. Jeff nodded, as though it had never ocurred to him that he wouldn't be him.

So we shot the shit with him for a bit. It's rare that any professional I've met has ever been less than gracious, but when they're as engaging and friendly as Jeff was, it really makes me re-think the whole misanthropy bit (but only until I go outside again, usually). Jeff had a stack of original watercolors for sale of DC superheroes, and John bought a couple off him (my budget was sadly depleted by that point). And then listen to this: when John mentioned that he'd gotten his mitts on a copy of Lost Dogs, one of Jeff's early books, and then I added that I'd been yet to track a copy down, Jeff says, "Oh, just e-mail me your address and I'll send you one." Are you kidding me? Of course, I took him up on it, and he not only sent me one, but also another early book of his, The True North, all complete with a big sketch on the envelope. Is this guy a fuckin' sweetheart or what?

If you haven't read Essex County yet, then lucky for you, the collected edition will be available this August, complete with all three volumes as well as the two mini-comics I also bought from Jeff last year, and tons other bonus stuff. The story follows the lives of Lester Papineau, Lou Lebeuf and Anne Quenneville, three people whose only connection at first seems to be the small Canadian town they live in, but which turns out to be only the most obvious connection. Their individual stories tie into each other in much deeper, many more complicated ways. Lemire masterfully reveals their roots and the commonality of their ostensibly disparate lives. Essex County is tied for my favorite book of 2008 with Skyscrapers of the Midwest by Josh Cotter (about whom you shall be hearing more from me, as well as his upcoming new project, Driven by Lemons, in these very pages), and that is no limp competition.

As beautiful as the book is on a whole, it is the first volume, the story of young comic-book collector Lester, that hooked me, since it is very much like looking into a mirror of my own lonely childhood, and the story truly captures how a life of fantasy and imagination can be very necessary and, at the same time, extremely frustrating. But regardless of who you are or your background, if you are unable to identify with the characters in Essex County, you might want to check with your doctor because you may not be a human being. And those are the stories that tend to resonate: stories about people.

Also lucky for you, Jeff Lemire has wisely been scooped up by Vertigo and will now get the wider exposure he and his work so richly deserve. First, we have shipping this month, July 8th, the hardcover The Nobody, Lemire's loving tribute to The Invisible Man. Then, mark your calendars for September, for that is when the first issue of Jeff's first on-going monthly will hit the spinner-racks. And your luck has yet to run out: the first issue (also from Vertigo) carries a cover price of a mere dollar. To pass up on that would be foolish, to say the very least.

As if Lemire didn't have enough on his plate, he was so kind as to allow me to pester him with a few questions via the electronic mails. So without further ado, Jeff Lemire in his own words.

This is gonna sound dumb, but: is it Le-MEER? Or Le-MIER?

Has being a new dad dramatically affected your work routine? I imagine it must be handy that you work at home, no?

It's hard to stay focused some days, but in general he is still new, so he sleeps a lot and I haven't really had to sacrifice much work time, because my wife is so fantastic to watch him most of the day. Sometimes he sits next to my drawing desk when I work. And his tiny tiny hands are great for cleaning out my ink jars too!

In the March Wizard interview, you talked about how you've read The Invisible Man a bunch of times and seen the Universal film as well, and how this was the genesis for The Nobody. Were you at any point worried that the source material would begin to sort of interfere with your adaptation? Like the ghost of H.G. Wells hovering over your shoulder while you worked or something? 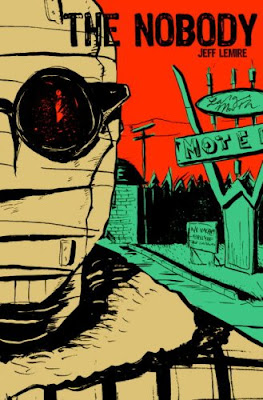 Ha! No, not really; from the start I knew I wasn't doing an adaptation, just taking the basic set-up and doing my own thing with it, so I didn't really rely or think too much about the source material once I got started, other than to make a few nods and allusions to it here and there for fans of the book to pick out.

Unless I'm mistaken, the up-coming Sweet Tooth is your first monthly book. Is the pressure on? I've read where you said Essex County took you three or four years to get finished. How sorely are you going to miss being able to take that long on a book?

It is my first monthly, but luckily I work really fast. I generally do 2-4 pages a day, so keeping up the deadlines on Sweet Tooth is not a problem, and I am also able to juggle working on longer form work as well, so each has its advantages. It can be freeing to work in 22 page chunks and then let it go and keep moving forward. 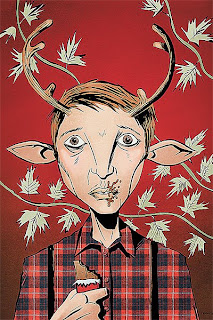 Sweet Tooth takes place in the U.S., even if it's a kinda warped vision of one. I wonder if you could talk a little about Canada vs. America. What I mean is Canada has a distinct culture and perspective, but a lot of Canadian artists who tackle the American problem seem to get it spot on. I guess what I'm getting at is do you think Canadians have such an insight into the American perspective because theirs is very similar? Very different? Or is it just because we're neighbors?

I think anyone who can take a step back and look at anything from a little distance can bring a fresh and insightful perspective, that someone who is in the middle of it may not always have. I think that's why Canadians are generally so adept at commenting on America. We are similar enough that we can relate to and understand the American experience, yet just far enough removed that we have a broader perspective sometimes.

You've done album cover artwork for bands like Art Brut and catl. Are you a big music guy? What kind of stuff do you listen to? Do you draw with music playing or do you need silence?

I am a big music fan, and am constantly listening to music while I work. My favorites would be Nick Cave, The Pogues, The Clash, Tom Waits, John Cale, Warren Zevon. I also have a soft spot for 80's pop like Depeche Mode, the Cure, New Order, The The.

You've said in interviews that you'd like to do some superhero stuff in the future, especially the Doom Patrol. Without giving too much of any future plot-lines away, what kinds of stories would you want to do with the Doom Patrol, or Batman, or any other beloved characters?

I would really only take on an established character if I could take it and do my own thing with it, really tell a story my way. Having said that, I would strip The Doom Patrol down to their original incarnation. They are freaks, grotesque outsiders who want badly to do the right thing, but the other superheroes look at them as unfortunates. They are the pariahs of the superhero world, and only have each other in the end. A really sad, lonely superhero story.

I want to ask you about alienation in your work, but I'm having a little difficulty framing a question around it. I'll try this: do you feel that comic-book collectors (y'know, guys who were a lot like Lester when they were kids) experience a special form of alienation?

I know I sure did. I spent a lot of time in my own head as a kid, and still do, and I think that seems to often be a shared trait of comic book fans and creators. I'm not sure why that is, but comics seem to draw people looking for escape and adventure from their own experiences.
*************************************************************************************
As always, I encourage you to go to your local comics retailer and ask--nay, demand--that they order any and all of the above for you because you're a law-abiding citizen who supports his/her small retailers instead of going to bullshit supermarket Borders or something. But if your retailer is dragging their feet and/or you're just a lazy-bones, follow the link for ordering information on the complete Essex County, and check back here for further info on how to get your greasy mitts on some of the finest comics being produced today.
Posted by Jimmy Callaway at 5:56 AM

nice one jimmy. i've been awaiting the collected ESSEX for a while now. Flipping thru GREEK STREET today, I was thinking that Vertigo need to shake things up artistically -- not that Gianfelice and others arent awesome -- it's just that all the books are becoming artistically similar, almost like a house-style. Lemire will be a nice alternative to that. Swwet Tooth also seems a bit risky, and I love Vertigo for continuaing to push forward. Go jeff.

Never heard of this bloke but sounds really good.